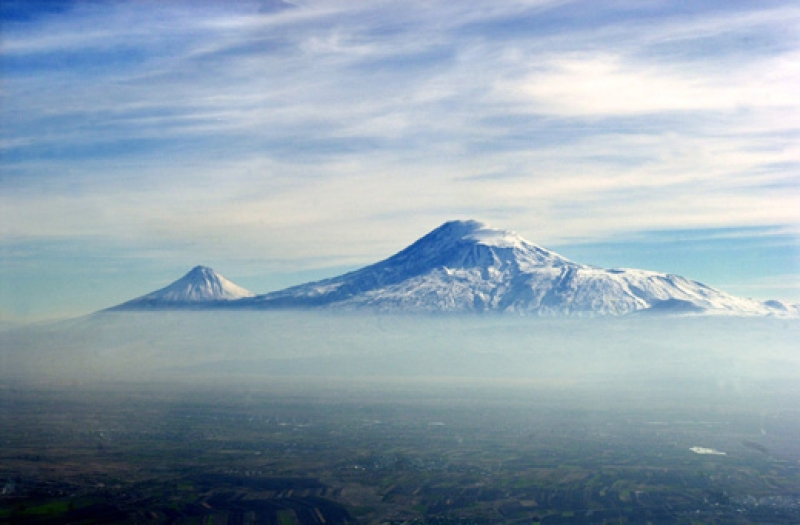 There are thousands of sights in Armenia, each uniquely impressive and memorable. However, anyone who visits Armenia will forever remember the most majestic and noble scene in the world, the fabulous view of Holy Mount Ararat.

The Bible states: "And on the seventeenth day of the seventh month the ark came to rest on the mount Ararat." (Genesis, 8:4). During the Great flood, after floating on waters for 150 days, Noah's ark parked on Mount Ararat, and on this very day, the human race was granted a second birth in Armenia: on Mount Ararat. This very fact makes both Ararat and Armenia a holy place.

Ararat is a blessed mountain for Armenians. This mountain has miraculous beauty, and is a symbol of the motherland for every Armenian living in any corner of the world. As well, Ararat is a holy pilgrimage destination for the whole world. Foreigners would come to Armenia as pilgrims even in the past, when the snow was melting and the gigantic ark of Noah could be seen. Then, the world temperature decreased and the ark, that once saved everything, was covered under snow. Many scientists and researchers have tried to find the exact place of the ark. And for this purpose Ararat has been photographed from satellites. Many interesting facts have been discovered and they indirectly confirm the existence of the ark. In any case, these puzzles will hopefully get their answers one day.

Mount Ararat has been a source of inspiration for many poets and painters with its matchless beauty. Biblical Mount Ararat has always been and still is the silent witness of the multi-centurial Armenian history.

In addition, Mount Ararat reminds us of one of the greatest crimes towards Armenians and humanity: the Armenian Genocide. Ararat is an eternal monument for over 1.5 million innocent Armenian victims massacred by Ottoman Turkey in 1915.

Armenians will always maintain the hope that this historic injustice will one day be overcome; that Turkey will admit its guilt and Mount Ararat will be free again.

Although the mountain is not in modern Armenia today, the best view of the Holy Mountain is in fact from Armenia.