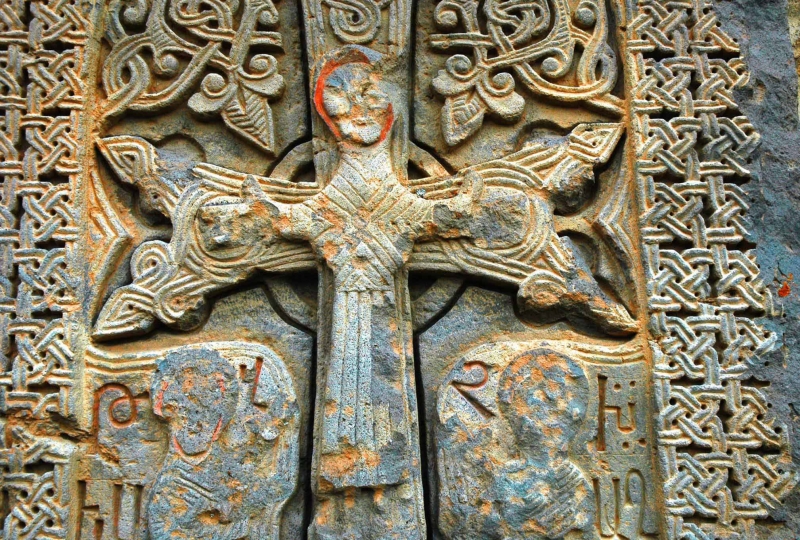 Armenia is a unique country; it has over 50,000 hand-made crosses, sculptured of rocks, noone is identical to another one. Each cross-stone has its own pattern; each one has its own story which goes back to the depth of ages. Sculpturing cross-stones, which sometimes weigh a few tons, requires hard work, genuine talent, and plenty of time. No nation in the world has employed such a powerful and long-lasting way to express its faith to God.

A typical cross stone is made out of slate of volcanic basalt or tuff. In the center of the cross stone is the symbol of Christ's crucifixion, which is usually resting on the symbol of the sun, or of the wheel of eternity. The cross itself and its surroundings is usually covered by fine patterns, or images of grapes and leaves. It is very typical of Armenian cross-stones to have branches of date-palm symbolizing Christ's glorious resurrection.

Cross stones were created after Armenians adopted Christianity in 301 and became the first Christian nation in the world. For Armenians, it was the symbol of Christ's resurrection, of His victory over death.

Cross-stones were placed as gravestones, also to celebrate important events, such as: victories in battles, construction of a temple, a church, and water channels. They were placed in holy places, in graveyards, near the roads and sometimes on hills and cliffs. In some cases, for example: in Geghard, which is a unique monastery dug into a gigantic rock, the cross-stones would be placed in the walls. The cross-stones themselves have been considered to be holy and their presence in a place underlined its holiness, its immaculate being.

Cross-stones were most intensively sculptured during the 12th and 13th centuries and the greatest masters of cross-stones of all times, Master Momik and Master Boghos are descendants of these centuries. The very meaningful and responsible task of sculpturing cross-stones was trusted only to those with the deepest faith towards God and with superb talents, since cross-stones were used as a sign of holiness of an area. Although foreigners and especially non-Christian invaders were keen to destroy all Armenian treasures throughout centuries, the fabulous works of masters have been preserved. Magnificent cross-stones of these men can be seen in Goshavank, Dadivank, etc. This unique culture of changing a rock into a monument that speaks the word of God and thus educates generations, was harmed by foreign invaders after the 13th century. The tradition, however, was never lost and even today many people in Armenia make cross-stones.


The oldest preserved cross-stone in Armenia, with a known date of creation, is the one granted to Queen Katriande, the beloved wife of King Ashot Bagratuni the First. It dates back to 879 and can be found in Garni, a pagan temple of the 1st century A.D.

Ancient Armenian graveyards are rich of these magnificent creations of humanity. The medieval cemetery in Noratus village is an example. In Noratus, there are about 900 cross-stones, some of which are about 1.5 m tall.

Cross-stones are spread all over historical and contemporary Armenia and this is why Armenia has become an "open air museum".