The Garni Temple: The Only Pagan Temple in Caucasus 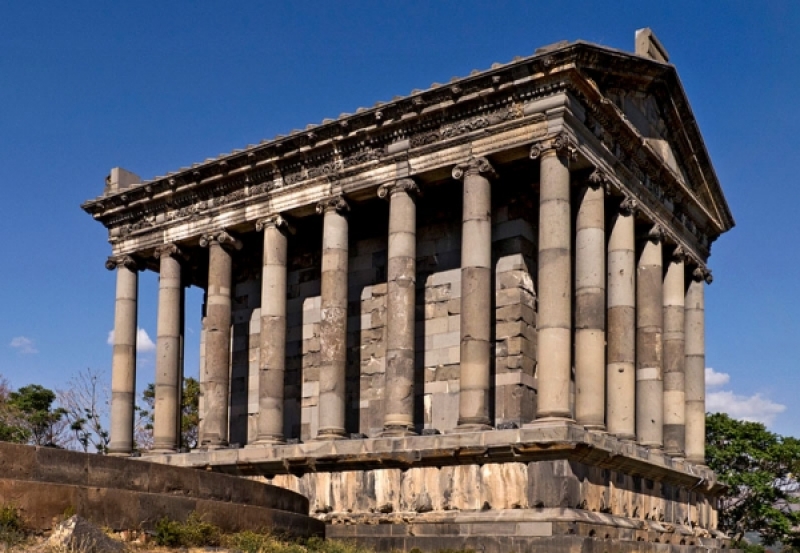 No tourist visiting Armenia can miss Garni, this unique 76 AD temple and Roman style baths, with its cyclopic stone walls that surround the royal summer residence and temple are were in fact first laid in the 3rd millennium BC by ancient Armenians.

The temple itself was built on top of an Urartian temple, and has the same floor dimensions as the temple of Sushi in Erebuni (5.05 X 7.98 meters). A common feature of sacred structures from oldest times through the Christian era is to orient the structures to the East, that is, to the rising sun.

The temple of Garni was dedicated to the sun goddess Mythra. Armenians shared Zoroastrian entities with Persia (and by the time of Garni Temple, with the Eastern Roman empire, which had adopted Mythra as a patron goddess), and worshipped fire as an ultimate gift from the gods, an entity in itself. However, after adopting Christianity in 301 this beautiful pagan temple lost its significance and the fortress of Garni became the summer residence of the kings.

Garni perfectly follows the Pythagorean and Platonic theories of sacred geometry in its design, a design for civilization carved form the wilderness.

And then there is the Other Side of Garni, the wilderness itself.

On a mountain trail between Lake Sevan and the fertile Ararat Valley, 7000 years of history wound its way through the Goghi and Azat River canyons below Garni and left indelible prints on the stone walls. Prints that can only be seen - just as Garni is best seen - from inside the canyon walls.

The Goghi and Azat Rivers meet at Garni dropping more than 300 feet below the temple site, creating an impenetrable natural fortress above, and a remarkably diverse eco system below. While dry summer winds whip the mountain plain above the canyon rim, below the river forest is always moist and cool: towering trees form a canopy above the foot paths along the river, and wild boar, deer, leopards and bears call the nature preserve home.

Famous Symphony Canyon was named for its rock formations, a series of perfectly cut diamond shaped granite, basalt, slag and andesite. Inside the canyon are the remains of a 16th century bridge, its finely engineered arches at one time leading to a narrow road that surmounted the Geghama Ridge and ended at Lake Sevan.

A few yards beyond, past a series of caverns yawning in the side of the canyon walls, the Goghi River joins with the Azat, and to the right is one of the most beautiful sights in Armenia: About 600 meters away and 300 feet above is the temple of Garni.

Inside the canyon, the upper rim and sky are soon blocked from view: tangled vines wrap themselves around centuries old trees that shade the hot sun from the fetid ground. In Spring, swarms of blue, yellow, gold and violet butterflies nest along the sun-dappled river bed, as many as a thousand might be resting on the banks or the side of a tree.

From here the canyon looks more beautiful, with occasional meadows and fields of sweet hay and goldenrod covering the patches of open land. In May the river swells and covers some of the natural path, but the terrain is easily navigated. Just after a narrowing in the canyon, the land widens into a dense forest, and it seems to be the most remote place on earth.

Garni is on the road to the Geghard Monastery complex of 13th centuryand both can be comfortably seen on the same day. Halfway to Garni however, take a few minutes to look at the Charents Arch, thru which you can enjoy the fantastic view of Ararat, especially on a clear day. Garni reminds to many a somewhat plain Parthenon. It was built in the first century A.D. by the Armenian King Tiridates (Trdat) with the money he received after visiting Emperor Nero in Rome. The temple was destroyed in 1679 in an earthquake, but was partially reconstructed in 1970s. (You can recognize the new stones by their lack of carving, which allows you to appreciate the originals.) It is an excellent reconstruction and a very worthwhile place to visit. You can even see carved graffiti in Arabic... There are also ruins of mosaic ancient baths and residences in Garni. If you came in a car (not bus) or can hike, take the time to go down to the very worthy Garni Gorge, and maybe hike up to the extensive and virtually unvisited ruins of Havuts Tar Monastery.

The fortress of Garni is situated in the Garni village in the Abovian District. That was a mighty fortress well known from chronicles (Cornelius Tacitus, Movses Khorenatsi, etc.). The structures of Garni combine elements of Hellenistic and national culture, which is an evidence of antique influences and the distinctive building traditions of the Armenian people. The artistic merit and uniqueness of its monuments place Garni among outstanding creations of architecture of world importance.

Just at the entrance to the Temple a visitor could find long rows of welcoming locals offering lavash – the Armenian bread baked in their own homes, tasty Armenian sweets – dried fruits holding the taste of the Sun, fantastic homemade vodka - mulberry, grape, apricot, apple etc.

There are regular 5-6 hour tours to Garni and the Geghard Monastery organized in Yerevan.

The trip starts at 10.00 from a meeting point at the Nalbandyan Street in Yerevan.