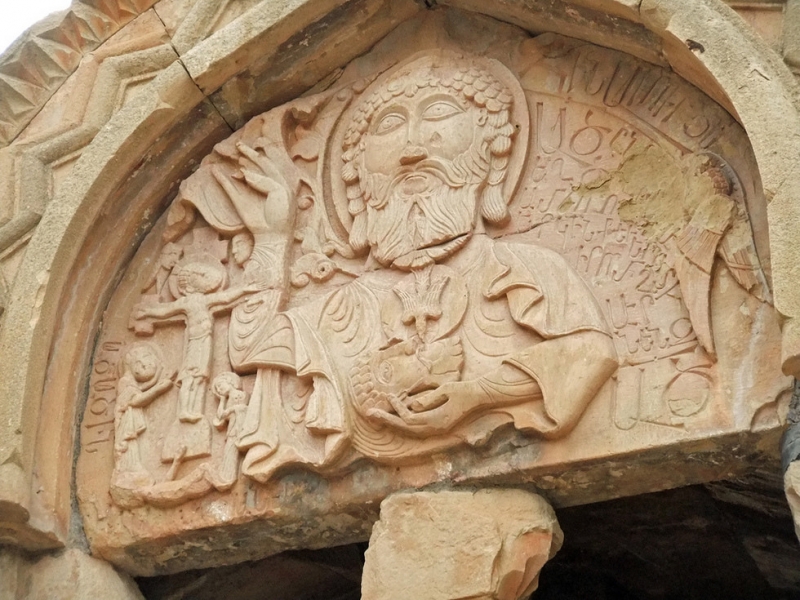 This time The Highlights presents its readers another pearl of Armenian medieval architecture, legendary Monastery of Noravank.

Let’s start with the following extract from the traveltoarmenia.am:

“…They say whatever the human hand touches, it eventually destroys it. But considering the fact that the man was created in the image of God, then he surely inherited things that can make him appear God-like. One such thing is his ability to create. The general truth is, the human imagination recognizes no limits and boundaries, but even knowing that very often when you see the reflection of it right in front, you are still being unable not to question that general truth because sometimes those creations appear too unreal to be true.

Such creations, particularly in regard to monasteries and churches, can be found scattered all around the world, among them the church of Sagrada Familia in Spain or the Chapel of Saint Michel d'Aiguilhe in France. In Armenia, it’s the outstanding monastery of Noravank, which can also be referred to as a masterpiece with its unique architectural solutions and design”.

…Saying “legendary” reminds about a legend (that seems a very truth-like one): when the Mongols invaded Armenia in the 13th century, they crumbled many churches/other historic monuments. Noravank, fortunately, escaped from sharing their fate thanks to a relief of the God himself depicted with big eyes on it as the invaders were “scared” by the other’s Idol and left the Monastery.

After a peace treaty between Agha Khan and the Orbelyan Family (Princes residing in Syunik Province of Armenia) was signed, Noravank, under the aegis of Orbelyans, was rebuilt, turned into important religious, educational and cultural center of medieval Armenia, but, alas, it lasted until the invasion of Lenk Timur hordes in the late 14th century.

Noravank (that means “New Monastery” in Armenian) Monastery that stands out not only due to it complex of beautiful churches and khachkars (cross-stones), but also surrounding natural beauty. The monastic complex is located 122km from Yerevan in a canyon made by the Amaghu river, near the city of Yeghegnadzor, having  tall, sheer, brick-red cliffs, directly across from the monastery.

Why “new”? Probably because of the fact that Noravank was built in 12th century at the place of two other churches erected much before.

Besides, the Complex is famous due to unique reliefs and khachkars created by Momik (1250-1339), a legendary artist, sculptor and architect invited to move from Cilicia to Armenia by Stepanos Orbelyan. Momik was buried at the Monastery site, and there is a khachkar there in his memory.

Noravank was founded in 1105 by Bishop Hovannes, fmr Abbot of Vahanavank Monastery (at the outscirts of the City of Kapan) who suceeded to get papers from Seljuk Turks (who occupied Armenia in those times) an the pontifical status of the Monastery.

And, as it was mentioned above, those centuries was a “Golden Age” for Noravank, - mostly due to patronage of the Orbelyan Princes.

The Church of Saint Astvatsatsin (Holy Mother) was built as a family sepulcher for the Orbelyan Princes in 1339 by Prince Burtegh, that’s why it’s called “Burteghashen”. The architect of the church was Momik.

On the first floor of the church there is the sepulcher with khatchkars and small carvings of the evangelists. Also, on the western wall there are two khatchkars out of which the one on the left is attributed to Momik. Narrow and small stairs found at the western entrance take to the second floor, where the prayer hall is. To the east of the prayer hall there is the semicircular sanctuary above which the carving of Jesus Christ with angels around Him can be seen, while right above the window to the east of it there is the carving of a dove, the symbol of the Holy Spirit.

The church’s dome is supported by a rotunda. The latter comprises 12 columns on which there are bird carvings as well as the portrait of Prince Burtegh with the church’s miniature in his hand.

The facades of the church feature bas relief sculptures.

Saint Karapet Church that currently lies in ruins, is the oldest church of the complex, which was possibly built in the place of a pre-Christian sacred site. Traces of three arches, a three-story platform and a southern front room have been preserved. It’s also probable that the walls of the church came with frescoes, which, however, have not been preserved.

The arches are made of multi-color tufa stone. The use of arches was firstly typical of secular buildings. Gradually, the style was adopted into the church architecture of the Middle East and Byzantine. Later on Armenian churches also included the arches.

There was so little room inside the church that it could accommodate only very few people. It is supposed that the church was meant only for the clergy and used to serve as a pilgrimage site.

Being the main church of the complex, cruciform Saint Stepanos Nakhavka Church was built in 1216-1223 by Prince Liparit Orbelyan. It represents a domed building with two-story annexes in the four corners. Note that the dome was destroyed during the 1840 earthquake and is currently restored. The church has only one entrance and it is in the western side. Priests used to reside on the second floors of the annexes. It’s where they used to pray and create manuscripts. In contrast, the first floors were meant for candle lighting.

The chapel-sepulcher of Saint Grigor built in 1275 for the family of Orbelyans is sometimes called Smbat’s Sepulcher because the latter’s buried there. The architect was Siranes. Notably, ten members of the Orbelyan family are buried in the sepulcher. The tombstone of Elikum III Orbelyan who was one of the most popular political figures, with depicted sleeping lion, is among them.

The chapel has a rectangular layout with a small semi-circular sanctuary to the east and a vaulted roof.

Among khachkars of Noravank are the ones dedicated to the Holy Mother, Saint Sargis, Saint Gevorg, Saint Poghos, Saint Petros, Saint Stepanos, Saint Hovhannes, Saint Grigor and so on.

Traditionally, the khachkars depicting Holy Mother were believed to protect the families and mothers, those depicting Saint Grigor were thought to give strength and courage to the warriors, and the stones with the image of the All-Savior were considered to cure of diseases.

And, finally, a couple of rewiews from TripAdwisor:

Gold in the Amaghu valley

So beautiful situated in a valley surrounded by high cliffs. Several churches and chapels all dating back to the 13th and 14th century. A church (reachable by a very narrow steep stair) atop a burial vault: unique building and very nicely sculptered. Several khachkars (cross-stones).

This beautiful monastery has so much to offer. There is an incredible restaurant next door which you must not miss. The architecture of the monasteries melds beautifully with the background making for some incredible pictures. The place has been renovated but still some buildings remain in ruins. Some of the incredible aspects of this monastery are the only depiction of God and the tombs of Armenian kings from the 12th century. Highly recommend!

Traveltoarmenia.am materials used in this story