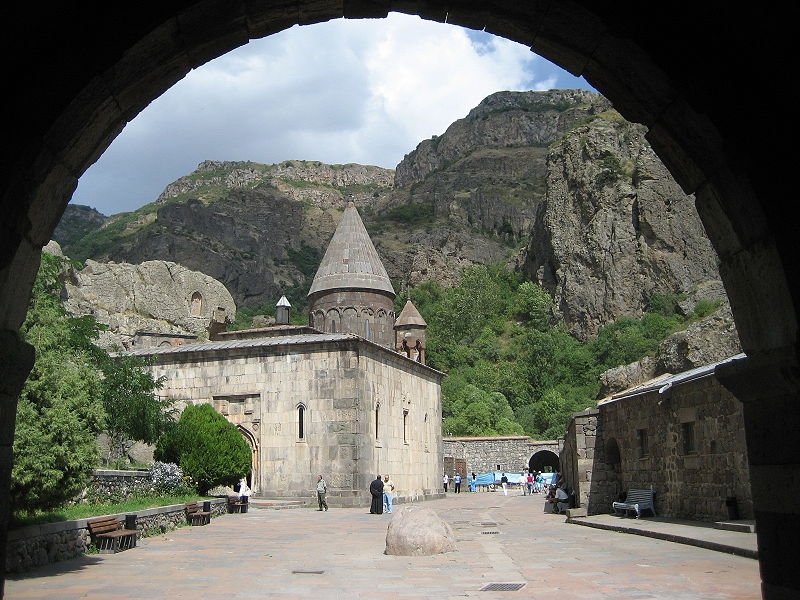 In 2000 the Monastery of Geghard and the Upper Azat River Valley were included in the UNESCO World Heritage List. Below we put an extract from the List:

The Monastery of Geghard and the Upper Azat Valley contains a number of churches and tombs, most of them cut into the living rock which illustrate Armenian medieval architecture at its highest point(Italicized by the author).(The Gokht brook that comes from 2,000 m height bypassing the Monastery joins the Azat River; the latter goes to the Garni Temple about which The Highlights told in its previous issue. Normally tourists visits Garni first, and then, after advancing some 9 kilometres on the highway,Geghard).

The complex of those medieval buildings is set into a landscape of great natural beauty, at the entrance to the Azat Valley. High cliffs from the northern side surround the complex while the defensive wall encircles the rest.

The monuments included in the property are dated from the 4th to the 13th century. At the early period, the Monastery was called Ayrivank (“Monastery in the Cave”) because of its rock-cut construction. The Monastery was founded, according to tradition by St. Gregory the Illuminator, (the Founder of Christianity in Armenia and the very first Catholicos of All Armenians),and was built following the adoption of Christianity as a state religion in Armenia (301 AD). Geghard has been renowned as well as for the relics housed there. The most celebrated of these was the spear (“geghard” in Armenian) that wounded Christ on the Cross and was allegedly brought there by the Apostle Thaddeus, from which comes its present name, Geghardavank (the Monastery of the Spear). The spear was kept in the Monastery for 500 years, (and, with some other relics, after it was transferred to the Holy See of Echmiadzin where (in museum) visitors can see it/them by present day). Relics of the Apostles Andrew and John the Baptist were donated in the 12thcentury. Besides,the deep believer visitors made numerous other kind of donations - land, money, and manuscripts within the centuries…

The main architectural complex was completed in the 13thcentury. It includes the Cathedral, the adjacent narthex, eastern and western rock-cut churches, the family tomb of the Proshyan Princes, Prince Papak’s and his wife Ruzukan’s tomb-chapel as well as various cells and numerous rock-cut cross-stones (khachkars). The Kathoghikè (main church) is in the classic Armenian form, an equal-armed cross inscribed in a square in plan and covered with a dome on a square base, linked with the base by vaulting. The east arm of the cross terminates in an apse, the remainder being square. In the corners are small barrel-vaulted two-storey chapels. On the internal walls there are many inscriptions recording donations. The masonry of the external walls is particularly finely finished and fitted. A “gavit” (entrance hall) links it with the first rock-cut church.

The first rock-cut church was built before 1250, entirely dug into the rock and on an equal-armed cruciform plan. To the east, a roughly square chamber cut into the rock was one of the princely tombs (“zhamatoun”) of the Proshyan Family. This gives access to the second rock-cut church built in 1283. The second zhamatoun, reached by an external staircase, contains the tombs of the Princes Merik and Grigor. A defensive wall encircled the monastery complex in the 12th to 13th centuries. Most of the monks lived in cells excavated into the rock-face outside the main defensive wall, which have been preserved, along with some simple oratories.

St. Astvatsatsin (Holy Mother of God) Chapel is the most ancient preserved monument outside the ramparts and is located on the western side, above the central entrance and on the left hand side, - some hundredmetres. It is partially hewed in the rock. There are engraved inscriptions on the walls, the earliest of which date back to 1177 and 1181 AD…”

Notably, the Monastery has had its renaissance under the aegis of the prominent military commanders Zaqaryan brothers. The main church, Katoghike was built by Zaqaryan Bros. Allegedly, relics of the Apostles Andrew and John the Baptist were kept in the latter. At present they are going to reconstruct the Chapel.Residential and economic constructions were built later, in the 17thcentury.

After Zaqaryans, Geghard and the neighborhood were acquired by the family of Khahbakyan-Proshyan Princes in the second half of the 13thcentury.Fortunately for the Monastery, it received generous patrons. They built churches, two tombs for representatives of a kind on the first and second floors, and cells in the surrounding rocks. For example, in one of them lived and worked the well-known Armenian historian of the 13th century Mkhitar Ayrivanetsi.

The Monastery of Geghard was an important and renowned religious and cultural center of medieval Armenia, with a school, scriptorium, library and many rock-cut dwelling cells for clergy which were cut by the nunsusing the simplest iron tools at the beginning of Christianity, - about 140 in total.
Historians Mkhitar Ayrivanetsi, Simeon Ayrivanetsi who lived and worked there in the 13thcentury, contributed to the development of the Armenian manuscript art. But in 923, everything was barbarously destroyed by the Arabs under the leadership of the Armenia Governor of the Arab Caliph in Armenia, Nasra. Numerousvalues, including manuscripts, were plundered and burnt ... And an earthquake followed that invasion…

Fortunately, some of these documents were saved by the clergymen, and they are now stored in national libraries in Berlin, Paris and, of course, in Matenadaran (the Museum-Institute of Ancient Manuscripts in Yerevan) ...

Here you can drink water from an ancient source that allegedly that has been healing people since Pagan times…
In total, it is said about Geghard that seven churches and 40 altars are cut down on its two floors (most of it in the rocks) ... Altars are difficult to count, but churches with tombs are no less, if not more ...

You can find numerous khachqars (cross-stones) and crosses cut just in the rocks dated back 11-13th century. Notably, it is impossible to find two of them with the same ornament.

According to a legend, the St. Gregory the Illuminator lived in one of the Monastery cell.

Today Geghard Monastery is a full scale functioning entity of the Armenian Apostolc Church having its Abbat and the Brotherhood living in contemporary building of cells.

And now we come back to the UNESCO World Heritage List:

“Criterion (ii): The Monastery of Geghard, with its remarkable rock-cut churches and tombs, is an exceptionally well preserved and complete example of medieval Armenian monastic architecture and decorative art, with many innovatory features which had a profound influence on subsequent developments in the region.

The Geghard complex is an exceptionally complete and well preserved example of a medieval monastic foundation in a remote area of great natural beauty. There have been no changes on the components of the inscribed property since the time of inscription. In addition, the property is surrounded by a substantial buffer zone, established in 1986, within which there are strict controls over any form of development and change.

However, its location in an active seismic zone, the pollution of the surrounding environment, the risk of rockslides, as well as the active tourism route are the main threats to the integrity of the site.

The Monastery of Geghard, with its remarkable rock-cut churches and tombs, is still preserved in its natural setting. The authenticity of the group is high, not least because the property has been in continuous use as a monastery for many centuries. All constructions included in the property, as well as the landscape, are not threatened in spite of restorations carried out during course of time. To meet conservation challenges, scientific research, renovation, fortification, design and preventive measures have been undertaken in order to ensure that authenticity is retained. Due to the passage of time, a part of the wall adjacent to the auxiliary construction collapsed and was renovated in 2006-2007, keeping the original materials. The designs for water isolation of the rock-hewn part and comprehensive interventions for Geghard Monastery were drafted in order to strengthen the complex…”

Well, dear Reader, is it possible after reading all this not to come to see Geghard?

View the embedded image gallery online at:
https://bestofarmenia.com/en/articles/the-armenian-treasures/geghard-monastery-%E2%80%9Coutstanding-universal-value%E2%80%9D#sigProId1a962de730
More in this category: « The Garni Temple: The Only Pagan Temple in Caucasus Noravank Monastery: “Gold in the Amaghu Valley” »