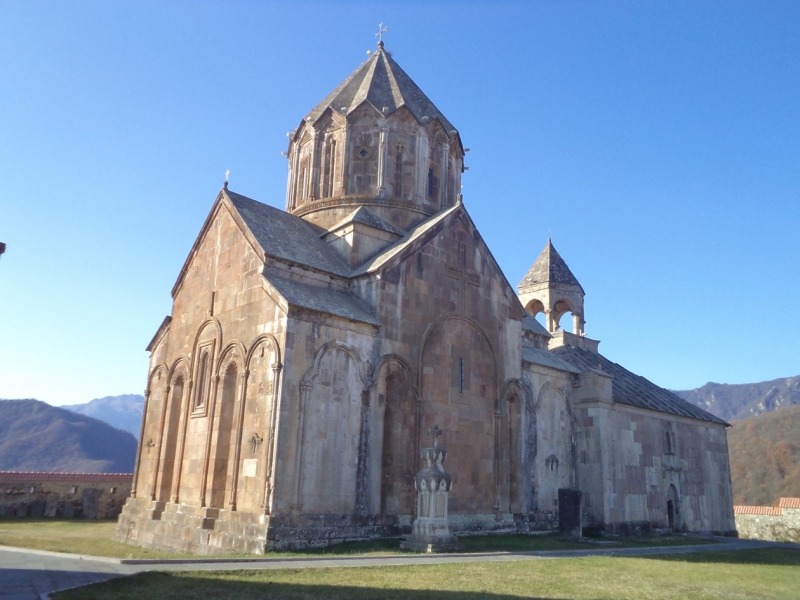 …5.42 a.m., you find yourself right under the egis of the toll and ancient St. John The Baptist Cathedral, that masterpiece of Armenian and world architecture, you go just few steps to the right, and…you see a miracle – the Sun is appearing slow from beyond the mountains…But this is not the last miracle you coud see there – get the left, behind the cells, stand at the edge of a canyon, and you’ll enjoy an incomparable beauty out of hail – Mrav Ridge…Its peaks are snow-covered even in hot summer .

We strongly believe that a few reviews from Tripadvisor will add significantly your author’s emotions:

Fantastic place. Feeling that the God is speaking to you. Meaningful silence. Gandzasar will remain in the heart forever. Everything here speaks of the high ascetic spirit of the ancient Armenians. They say that there is the head of John The Baptisthidden here. I do not know whether it is true or not, but here you can see the tombs of the high clergy which are arranged so that all the visitors can walk on them - because they (those resting in peace) wanted to atone their sins even after death with such a humbleness.

"Beautiful monastery in the mountains"

Magnificent XIII century monastery located on a rocky outcrop about forty km from Stepanakert. The church -  St. Jean Baptiste Cathedral…The garden is on the right side of the church, andthere are very old cross-stones there... A must-see place is an exhibition of manuscripts in the building on the left side of the church and filled with the most richly illuminated books dating from the thirteenth century. You can also see a showcase dedicated to Napoléon Bonaparte with his autograph. This exhibition was created very recently. Finally, at the back of the church, you have a beautiful view of the valley that can make beautiful pictures of the landscape. In short, you must see it”.

“Gandzasar is Armenian and it's not in Azerbaijan”

Gandzasar monastery is a 10th to 13th century Armenian monastery situated in the Mardakert district of Artsakh Republic (Armenia). The monastery holds relics believed to belong to St. John the Baptist and his father St Zechariah. Gandzasar is now the seat of the Archbishop of Artsakh.
Recently a branch of Yerevan Matenadaran has been located here and holds most of Artsakh manuscripts.gr
About 70km from Stepanakert. The road is ok for any sedan.
Once you are there, don't miss the well known loin-mountain located below. You need to drive left (while straight takes you to Monastery) to get there. Keep your eye on road marks...
Plan half day for your trip. Also check out the map, you may combine your trip to Dadivank(another ancient Monastery) as well.

…As the last user said, the Gandzasar Monastery is located in the Mardakert District of the Nagorno-Karabakh (Artsakh at present) Republic, and is 1-1.5 hours drive from the Republic’s capital City of Stepanakert. It stands atop of Mount Gandzasar (hence the name), a large green hill that rises above the historical village of Vank.

In Armenian “Gandzasar” means “Treasure Mountain”, that is to say “gandz” stands for “treasure” and “sar” for “mountain” which could point to old copper and silver mines found in the nearby area. But saying“treasure” we should rather mean the Monastery itself with its really great architectural, historical and spiritual value.

Besides, it is believed that Gandzasar’s Cathedral holds a very important and key Christian relic, head of St. Hovhannes Mkrtich (St. John the Baptist) brought here from Palestine. So Gandzasar Monastery has always been an important and popular place of pilgrimage not only in Armenia and Nagorno-Kharabakh (Artsakh) but from all over the world.

…In this connection your author desires tell the following story.

…It was unprecedented hot summer’2014 when, seating with then-the abbot Fr. Grigor Markosyan, alas of the blessed memory (1956-2016), a man whose name is inseparable from the Gandzasar itself, Liberation War, City of Yerevan and many other things, in his office, yours truly was forced to open a window. Suddenly we see a human head inside the window that asks us in terrible English…Mere one word is clear: “…baptist”. I’m astounded, but in the next second Fr.Grigor says: “He means the head of St.John The Baptist”. “Yes, yes, I wanna see it”, - says happily a foreigner who proved to be a travel agent from Spain. Well, sometimes SOME legends are accepted like a reality…

As we spoke about legends, one must note that there are some other legends and “miracles” connected with this place.

During the heavy bombardment by Azerbaijani army in the times of the Karabakh Liberation War (1992-1994), luckily or miraculously, the shells  flying right on the cupola of the Monastery suddenly changed their direction and exploded away from the territory of the monastery. (So almost everybody who visits Gandzasar is convinced that it is impossible to leave this place and stay an atheist). Nevertheless, one rocket launched from an Azeri warplane (driven by a Ukrainian mercenary) get the cupola, but thanks God, did not explode. And similar shell you can find in the wall behind the Monastetry cells.

The construction of Gandzasar's Cathedral of St. John the Baptist began in 1216, under the patronage of the Armenian Prince of Khachen, Hasan-Jalal Dawla, and it was completed in 1238 and consecrated on July 22, 1240. Prince Hasan Jalal relates to one of the most ancient aristocratic families in world history—the Arranshahiks—who ruled eastern Armenian lands since early medieval times, if not much before.

In the 14th century, a regional Catholicosate emerged in Artsakh (Karabakh). Gandzasar Monastery became the Holy See of Gandzasar. In the 16th century it became subordinate to the Etchmiadzin Catholicosate (Armenia, Holy See of Catholicos of All Armenians). Many of its Catholicoi were members of the Hasan-Jalal Dawla dynasty.

The complex is protected by high walls. Within the complex is the Cathedral of St. John the Baptist (Surb Hovannes Mkrtich Yekeghetsi in Armenian), built between 1216 and 1238.The drum of its dome has exquisite bas-reliefs that depict the Crucifixion, Adam and Eve, and two ministers holding a model of the church above their heads as an offer to the God.

Some prominent art historians consider the Monastery as a masterpiece of Armenian architecture. Anatoly L. Yakobson, a prominent Soviet medieval art historian, described Gandzasar as a "pearl of architectural art....This is a unique monument of medieval architecture and monumental sculpture, which by right ought to be regarded as an encyclopedia of 13th-century Armenian art."And Professor Charles Diehl (1859-1944) of the Sorbonne University, the renowned French art historian and specialist on Byzantium, placed Gandzasar in a group of five most important examples of Armenian monumental art which belong to the world’s architectural masterpieces.

The exclusively rich decorative pattern of the interior and exterior renders a particular uniqueness to Gandzasar’s Cathedral. After the Akhtamar Cathedral of St. Cross on the Lake Van (in Turkey at present), Gandzasar contains the largest amount of sculpted decor compared to other architectural ensembles of Armenia. As it was mentioned above, the most famous of Gandzasar’s bas-reliefs that decorate its domes and walls are Adam and Eve, Jesus Christ, a group of stylized animals (Lions, Eagles and Bulls—symbols of the Vakhtangian Princes to whom Hasan Jalal belonged), and two Churchwardens holding on their hands miniature models of the cathedral.

Overall, up to 150 Armenian stone-borne texts are found on the walls of the Cathedral, including a wall-large inscription made by the order of Asan-Jalal himself.

Gandzasar's cathedral church shares many architectural forms with the main churches of two other Armenian monasteries also built in the mid-13th century: Hovhannavank Monastery and Harichavank Monastery.And some late medieval Armenian churches were evidently inspired by Gandzasar’s characteristic dome. One of them is the renowned Cathedral of the St. Stephanos Monastery built in the 17th century; it is located at the meeting point of the borders of Armenia and Nakhichevan (ancient Armenian province voluntarily transferred by J.Stalin to Azerbaijan in 1920s).

Hasan Jalal’s successors, who assumed the surname Hasan-Jalalian in memory of their prominent ancestor, branched out into two lines. The clerical line hereditarily controlled top positions of the Holy See of Gandzasar, while the original, princely one, continued administering the Province of Khachen as princes and meliks (dukes).

Gandzasar shared the turbulent history of the Armenian people. In a colophon, from 1417, the superior of the Monastery deplores the situation whereby the princes of Khachen are “in the hands of lawless people” and “the House of Armenia is thus weakened.”

The Monastery was sacked several times, most notably—by Mongol hordes, in the 13th century. In the late 13th century, Gandzasar was looted by the gangs of the Turkic chieftain Ibrahim-Khalil Javanshir—a tribal lord from the family of the self-proclaimed “Khans of Karabakh.” By usurping Artsakh’s Castle of Shushi for over 50 years (until driven out and assassinated by Russians and Armenians, in 1805), Ibrahim—and his father Panah-Ali before him—had been terrorizing Gandzasar’s clergy. In 1786, this policy culminated in capturing, torturing and killing Gandzasar’s Catholicos Hovhannes Gandzasaretsi and his brothers by Ibrahim’s henchmen.

Most recently Gandzasar was attacked in 1992, in the course of Azerbaijan ’s anti-Armenian aggression and Nagorno Karabakh’s heroic self-defense. But despite the challenges before them, Armenians—whether throughout the Middle Ages or in the twentieth century—always organized extraordinary measures to defend Gandzasar and shield it from damage.(It is symbolic that it was near Gandzasar Monastery where the first large regiments of Azerbaijani Army were rounded up and destroyed by Nagorno Karabakh self-defense units).

(In partnership with the Monastery of Tatev of neighboring province of Syunik (today’s Republic of Armenia), Gandzasar Monastery is also known as a center of Armenian independence movement of the 18th century initiated by the Armenian dukes (meliks) of Artsakh. In was in Gandzasar where the representatives of Armenian nobility prepared and signed the famous appeal for assistance addressed to the Russian monarch Peter I the Great.

From 1923 to 1992 when Nagorno-Karabakh was within Soviet Azerbaijan, Gandzasar Monastery was in terrible state. But after liberation of this ancient Armenian land thanks to generosity of Moscow-based Armenian businessman and philantropist, a Vank village native Levon G. Hayrapetyan the whole complex was cleaned, renovated and reconstructed and turned to a fully-functioning Monastery.

A traditional domain of the Catholicos (Archpriest) of the Eastern Territory of Armenia, Gandzasar Monastery is the center of Nagorno-Karabakh's religious life and present-day seat of the Archbishop of Artsakh of the Armenian Apostolic Church.

Liturgies, baptism, weddings are being held by the Monastery clergy.

How to Get to Gandzasar

Already looking forward to visit Gandzasar monastery in Mardakert? Then we can offer several options for traveling to Nagorno-Karabakh and enjoying its historical-architectural monuments, such as the Gandzasar Monastery and many others.

Where to Stay During Your Visit to Gandzasar?

There are some quite good hotels to stay during your visit in Karabakh that are just a few kilometers away from Gandzasar monastery.

Hotel Tsovin Qar (Sea Stone) is on the right bank of the Khachen River and is surrounded by picturesque woods. Some rooms have balconies that are overlooking these forests.

During your stay, you will feel the spirit of wild nature and the flavor of national cuisine of Nagorno-Karabakh. The hotel has an open-air restaurant, a cozy little restaurant, and a tavern where you can enjoy peaceful rural evenings

Not far away from this hotel there is another good option called Eclectica. Among residents it is also known as Titanic due to its unique architecture in the form of a ship and with original interior. The hotel has 18 rooms, a bar in marine style, a restaurant, cafes, riding hall for horses, table tennis, etc.

View the embedded image gallery online at:
https://bestofarmenia.com/en/articles/the-armenian-treasures/gandzasar-monastery#sigProIde746c58d8a
More in this category: The Garni Temple: The Only Pagan Temple in Caucasus »